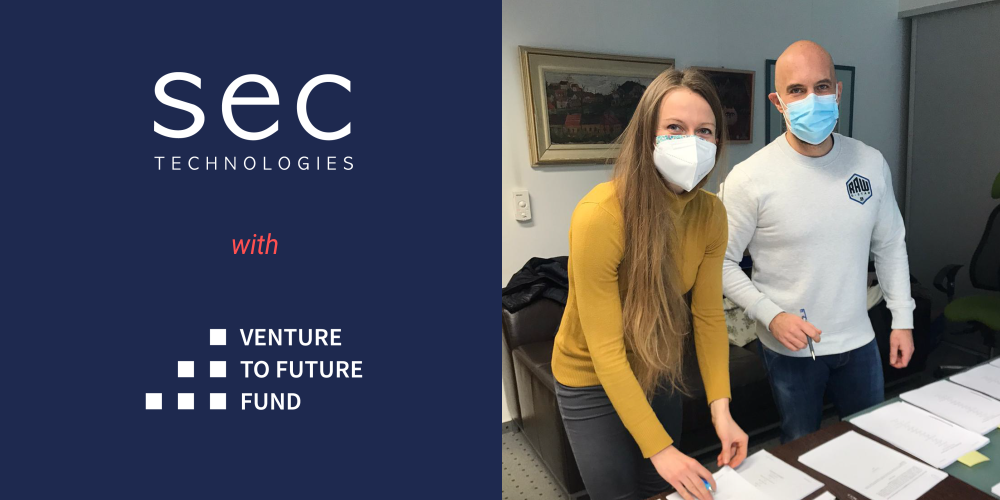 The Liptov company SEC Technologies received an investment of € 3 million

It means expansion into new markets and job creation

Liptovský Mikuláš (February 22, 2021) - The Slovak technology company SEC Technologies received an investment of up to € 3 million. The company gained the trust of the Venture to Future Fund (VFF) and investors on the Crowdberry platform and closed the first round of the so-called Series A funding. SEC Technologies thus continues the long tradition of developing cutting-edge technologies in Liptov, where new jobs will be created thanks to the investment. Due to strict anti-epidemic measures, the agreement was signed separately by each party on Friday.

"For us, the entry of major investors means, first and foremost, trust in our team and in our product. Here in Slovakia, we managed to develop a unique remote gas detection technology, which is of interest to several countries around the world, as it significantly exceeds the existing competition on the market," said SEC Technologies Director Michal Šimko after the first round of funding.

In recent years, SEC Technologies has undergone rigorous testing and reviews in the United States, several EU countries and South East Asia, as well as the Middle East. Existing customers include the armed forces of these countries, and also civil protection organisations such as firefighters and other security forces. The investment with high added value will support the connection of innovative research with practice and will deepen the cooperation of Slovak experts with world scientific leaders.

"SEC Technologies is another example of Slovakia's innovative potential. They build on the results of several years of technology development, which has found application among customers from around the world. In the field of gas detection, they have no direct competitor within its scope. The possibilities of using this technology are wide and its importance can be crucial in solving current and future safety or environmental challenges. It was this potential that appealed to investors," says Michal Ondrišek, Crowdberry partner.

"SEC Technologies is the embodiment of many years of effort and cutting-edge research, which has made a small company from Liptov literally unique in the world. Their example only points to the huge potential of Slovak companies to succeed on the global scene. VFF was established to support innovative companies and we are pleased that SEC Technologies has become one of the first investments in the history of the fund," adds Matej Říha, Chairman of the Board of Venture to Future Fund.

SEC Technologies plan to use the acquired capital to increase production capacity and expand into the civilian market. Following the reliable detection of gases from a distance, there is a great demand in many industries as well, and this technology can also be used in the environmental protection segment. Thanks to obtaining funding, SEC Technologies will create new jobs in Liptovský Mikuláš in the next two years, half of which will be in research and development with its high added value.

SEC Technologies is a Slovak technology company that has developed the Falcon 4G device for gas detection over a distance of up to 6 kilometres. Its fourth-generation model uses a laser to detect toxic gases, industrial chemicals and biologically harmful substances. Compared to foreign competitors, it achieves up to 100 times higher sensitivity and at the same time it is the only active remote detector on the world market. www.sec-technologies.com

Crowdberry is a leading platform for alternative investments in Slovakia and the Czech Republic with branches in Prague, Bratislava and Košice. The platform was established in 2015 in cooperation with Tatra banka Private Banking. It connects innovative Czech and Slovak companies with private investors in order to provide attractive investment opportunities and support the growth of companies and real estate projects. With more than 3,500 investors and capital raised to date of nearly € 30 million, Crowdberry provides an innovative and fast-growing approach to smart growth capital. Through its subsidiary CB Investment Management in Slovakia, the company manages a fund to support start-up companies with a volume of more than € 23 million. www.crowdberry.eu

The Venture to Future Fund (VFF) is the result of a joint initiative of the European Investment Bank (EIB) and the Ministry of Finance of the Slovak Republic through Slovak Investment Holding. It was founded in 2019, and with its setting up, is the first venture capital fund of its kind in the CEE region, which managed to raise capital from the EIB. VFF is focused primarily on the support and development of the venture capital market for small and medium-sized enterprises in Slovakia and the EU. The fund's investment strategy is to support innovative companies in the growth phase of their life cycle with the potential to expand into European and global markets. The fund has finances of more than € 40 million. www.vff.sk