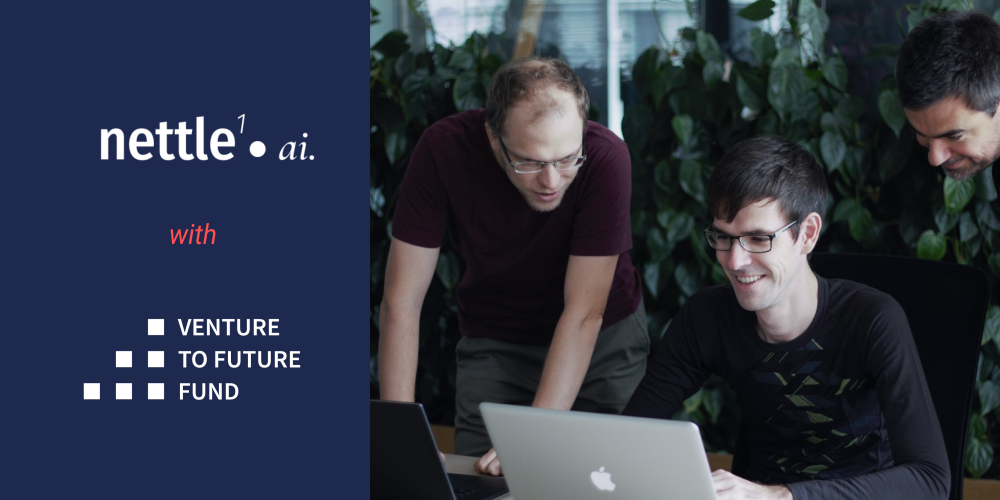 Bratislava, March 2, 2021 - The Slovak company nettle.ai, which focuses on solutions in the field of conversational technologies using artificial intelligence, received a significant investment of € 1 million from Crowdberry investors and the Venture to Future Fund (VFF). The company will use the investment for its further growth, marketing and completion of its product portfolio.

Nettle.ai was founded in 2018 and in a short time has developed into one of the leaders in the field of intelligent conversational solutions in the Central European region. Their artificial intelligence, in the form of virtual assistants (chatbots), is used by companies such as ESET, Samsung, 365.banka or Jaguar Land Rover in communication with their customers. As one of the few Central European companies, it is one of the official partners of Google Business Messages, while cooperating with the technology giant on several solutions in the introduction of new SMS standards, the so-called RCS communication. Nettle.ai is also a partner of the European Robotics Centre of the leading audit and consulting company Mazars. The founders of nettle.ai, whose sales grew last year despite the recession caused by the pandemic, have big plans for it. Crowdberry Investors and the VFF Investment Fund are expected to help them further expand into new markets and develop products.

"We value investor trust and see investment as a significant shift in our development. We want to build on our competitive advantage - and that is our own software, the ability to design and deploy a functional turnkey chatbot for clients and our unique partnerships. In addition to the project delivery of chatbots, mailbots and voicebots, thanks to the investment, we are also starting to focus on complex vertically oriented conversational interfaces that will allow us to scale. The first such "box" products include a chatbot for car dealers and a chatbot for debt collection," says Andrej Greguš, one of the founders of nettle.ai.

"The development of the company is also positively influenced by the dynamics of the market, which is driven by technological progress and automation. The chatbot market alone expects global growth of 30% (CAGR 2018 - 2025) and is expected to reach a value of $ 15 billion[1]. It is here that we see a huge potential for the application of intelligent solutions developed by nettle.ai, and thereby increasing the value of the company," says Michal Ondrišek, from the partner Crowdberry.

By 2023, 2.5 billion hours of customer service per year should be saved worldwide, resulting in $ 11 billion in cost savings for retail, banking and healthcare. More than 80% of companies[2] should be implementing their own chatbots in communication in the near future, with companies spending an average of 50% more on virtual assistants per year than on mobile applications[3]. "Conversational technologies bring considerable savings and efficiency to companies for which quality customer service is today a matter of survival or reputation. Nettle.ai has the advantage of a small company which, thanks to its technological and business background, can respond very flexibly to the requirements of large companies," adds Michal Ondrišek from Crowdberry.

"Creating algorithms with the help of artificial intelligence and machine learning is leading to tremendous progress in this fast-growing industry. Constant progress in this field has led to the fact that artificial intelligence is no longer a futuristic technology, but is increasingly integrated into all areas of our lives. One of the applications of artificial intelligence and machine learning are chatbots, which are fast becoming an essential part of efficiently set up processes in every organisation. This field is being developed by nettle.ai, which has become one of the most innovative companies engaged in chatbot development and natural language processing. We see potential in the company and we believe that in the coming years it will bring new solutions that will quickly be adopted by modernly managed companies. The main goal of VFF, which is a joint initiative of Slovak Investment Holding, the European Investment Bank and the Ministry of Finance of the Slovak Republic, is to support investments in innovative companies," says Matej Říha, Chairman of the Board of Venture to Future Fund.

Nettle.ai has received several significant awards, including the Best AI / ML Startup Award in Slovakia at the Central European Startup Awards in 2019. It has interesting references in its portfolio - their conversational AI tools are used in communication with customers by several technology companies or financial institutions. In addition, they can also find application in the entertainment or gaming industry, tourism, ticket sales, debt collection, as well as in marketing or as a support for HR departments of companies. The company is also a global leader in the use of chatbots in banner ads on the Google Marketing Platform, and is also a qualified partner of Google Cloud for Startups, thanks to which it received support in the form of computing capacity worth € 100,000.

Nettle.ai has been developing software for structured data extraction and automated natural language processing since 2018. It is dedicated to the design and delivery of meaningful conversational interfaces (including chatbots) as well as the implementation of a wide range of proprietary tools that power them. nettle.ai is the first company in the world to be allowed by Google to deploy chatbots in banner ads. www.nettle.ai

Crowdberry is a leading platform for alternative investments in Slovakia and the Czech Republic with branches in Prague, Bratislava and Košice. The investment platform was established in 2015 in cooperation with Tatra banka Private Banking. It connects innovative Czech and Slovak companies and real estate projects with private investors in order to provide attractive investment opportunities. With more than 3,500 investors and capital raised to date of nearly € 30 million, Crowdberry provides an innovative and fast-growing approach to smart growth capital. Through its subsidiary CB Investment Management in Slovakia, the company manages a fund to support start-up companies with a volume of more than € 23 million. www.crowdberry.eu

About Venture to Future Fund

The Venture to Future Fund (VFF) is aimed at investing in small and medium-sized enterprises with a strong technological or innovative element. The fund's investment strategy is to provide venture capital to companies in the growth phase of their life cycle with the potential to expand into other European and global markets. At present, the fund has funds in the amount of € 40.4 million. VFF was established to support the venture capital market in Slovakia and is the result of a joint initiative of the European Investment Bank (EIB) and the Ministry of Finance of the Slovak Republic through Slovak Investment Holding. It was founded in 2019 and with its setting up represents the first venture capital fund of its kind in the CEE region, which managed to raise capital from the EIB. www.vff.sk